Attorney and Advocate for the Seriously Ill and Injured
Providing Options. Solving Problems. 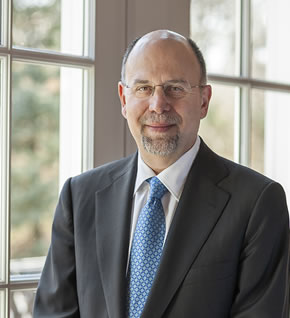 “The Patients – To their Defense”
Wall Street Journal

Joseph Romano is a nationally known attorney/advocate whose practice is limited to the representation of children and adults with spinal cord injuries, traumatic brain injuries, amputations, burns, Cerebral Palsy, and other serious/catastrophic injuries.

In addition, Mr. Romano focuses his practice on pursuing liability claims and assisting trauma patients with discharge planning and identifying and securing “private funding” from third party private companies. This funding pays for needed supports and services and allows a family to care for their loved one at home during the time it takes to settle or try their case.

In 1996, Mr. Romano was selected as the only attorney along with medical experts in the field of traumatic brain and spinal cord injury to write a chapter in the medical treatiste Neurotrauma. His chapter is entitled Medico-Legal Aspects of Head and Spinal Injury. Since 1988 he has published over 300 articles and six editions of the Legal Rights of the Catastrophically Ill and Injured: A Family Guide.

Mr. Romano has recovered in excess of five hundred million dollars ($500,000,000) for his clients who have suffered traumatic injuries.

$51 M – PREMISES LIABILITY
Verdict against the Philadelphia mass transit agency in a case in which a boy’s foot was severed in an escalator. SEPTA was also fined for concealing documents.

$49 M – MEDICAL MALPRACTICE
Verdict in a hospital error case that left a young man severely brain damaged. The award set a Pennsylvania record at the time for a medical malpractice.

$19.9 M – ASSAULT
Verdict for a patient who was assaulted while in the hospital suffering severe injuries. Record Delaware verdict.

$19.1 M – WORKPLACE INJURY
Pennsylvania verdict for a woman left incapacitated after being struck by a van as she worked at a roadside construction site.

$19 M – PRODUCT LIABILITY
Settlement for a young man who suffered a traumatic brain injury by a defective product.

$17.5 M – FEDERAL TORT CLAIMS ACT
Verdict against the VA Hospital for former Marine who suffered a stroke during a dental procedure.  The verdict includes periodic payments.

$17 M – PRODUCT LIABILITY
Settlement for a woman who suffered serious injuries when her arm was pulled into a machine that was defectively designed. The settlement includes periodic payments.

$15 M – ELECTROCUTION/BURN INJURY
Settlement for a man who struck an electrical powerline and suffered extensive burns and amputations. The settlement includes periodic payments.

$12.25 – PREMISES LIABILITY
Settlement with the Philadelphia housing authority and property manager for girl who suffered brain damage after an asthma attack caused by mold in home.

$12 M – CONSTRUCTION ACCIDENT
Worker fell at a construction site due to the negligence of a subcontractor and suffered a traumatic brain injury and partial vision loss. The settlement includes periodic payments.

$10 M – PREMISES LIABILITY
Catastrophic injuries when minor child fell through a window screen in an apartment complex. The window screen did not have window locks.

$8.5 M – NEGLIGENT SUPERVISION
Settlement for a young man who suffered a traumatic brain injury after being struck by a truck.

$ 7.5 M – EXPLOSION/BURN INJURY
Settlement for a man who suffered traumatic burns after a boiler exploded because it was defectively designed. The settlement includes periodic payments.

$ 1 M – GYMNASTIC INJURY
Settlement for a minor who suffered a spinal cord injury because of negligent supervision at a gymnastic class.

The gift that Joe had was that he knew my rights…I would never have known what to do, especially in my condition.
D.B.The Patients – To Their Defense, The Wall Street Journal

My son suffered a catastrophic near drowning injury. I knew from the initial meeting with Mr. Romano that he had the experience and knowledge to get the best outcome for my son. He went above and beyond by helping me navigate the health care and governmental systems to maximize benefits for my son while the case was in litigation. The resolution of the lawsuit was more than I could have ever expected!
L.H.

If you have questions or would like more information call (800) 331-4134 or email info@josephromanolaw.com.

Families need to fight for all of the benefits and services that their loved one is entitled to, and use Private Funding to supplement their existing health insurance and governmental benefits. 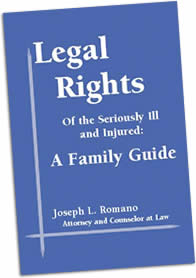 Get your FREE copy

If you have questions or if you would like to receive a FREE copy of Joseph Romano’s book “Legal Rights of the Seriously Ill and Injured: A Family Guide” please call (800) 331-4134 or email info@josephromanolaw.com.